The 2015 AUSACE Program is available!

Around 75 scholars attended the 19th annual AUSACE conference at Yarmouk University in Irbid, Jordan. One of the highlights of the conference was the keynote speech from Dr. Donald Shaw, an esteemed professor of communication at the University of North Carolina and the co-founder of agenda-setting theory. Dr. Shaw enlivened the conference with his vigorous participation in all the research presentations and panels.

The Conference Program is available! 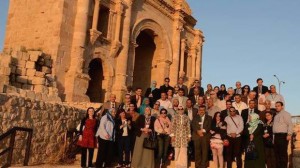 The Arab-U.S. Association for Communication Educators (AUSACE) held its 18th international annual conference November 11-15 in Tangier, Morocco at King Fahd School of Translation under the theme: “New horizons of communication in a time of crisis.”

More than 140 scholars from universities and colleges across Europe, the United States, the Middle East, Africa and Asia presented their research work on subjects including the Arab Spring, social media, cyberspace and surveillance. This was the third time AUSACE has met in Tangier.

The Department of Communication at Georgia State University and The Center for Media Education (CIME) welcomed educators, students and journalists to the 17th annual conference of the Arab-US Association of Communication Educators in Atlanta, Georgia., USA for AUSACE 2012. The 2012 conference featured keynote speeches from prominent journalists and media experts, as well as vibrant panel discussions about the state of journalism in the Arab world, and research presentations from communication and journalism experts from around the world. The AUSACE conference extended past four days, from November 16 through November 19, 2012. The 2012 theme was Transforming Middle East Media: Creating a New Culture. With new governments and greater press freedom in several Arab countries, the conference participants examined and discussed ways in which educators and journalists work together to help improve the practice of journalism in the Middle East.

Click here to see the program of the 2012 AUSACE Conference at Georgia State.

Click here to view videos from the conference.
Previous Conferences: